PODCAST: EDUCATION TO ACCOMPANY THE GREAT TRANSFORMATION OF OUR SOCIETY

In this episode, The Caring Gallery takes a look at the creation of a new design school and the journey of its founder, Dominique Sciamma. His ambition is to train the younger generation to be ready to face the challenges of the contemporary world and to transform it in a virtuous way. His only weapon is education.

Dominique Sciamma is the founder of the new CY School of Design, a school of transition designed to meet the challenges of the 21st century. Born from the observation of the ecological and social crises that are shaking our world today, this new school reinvents the model of public design schools in France. The program developed by Dominique crosses many disciplines. It is as diverse and rich as her career path, and responds to all the challenges that the world presents to young designers. It is composed of seven pillars: culture, representation, creation, human and social sciences, collaboration and problem solving, the functioning of a human organization, and finally professionalization. 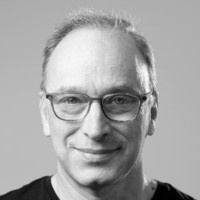 Dominique Sciamma has the ability to be a real Swiss Army knife, because of a childhood dream that was almost a dream. Very early on, he decided to be part of those who count, who move the lines, who master the world and who will perhaps save it.

Dominique Sciamma was carried by this global wish, sometimes as a computer scientist, sometimes as a mathematician or even as a scriptwriter... But none of these experiences was a goal, the discovery of the world had to be as wide as possible in order to be able to respond to all the diversity of the problems posed by the constantly changing society. Over the years, his view of the world has changed but he remains convinced that things must change.

A new kind of design school

Dominique Sciamma imagined CY School of Design from nothing, only his observations and his sensitivity. He was free of the historical liabilities that schools usually have.

With this new school, he reinvents the model of public design schools in France. The very existence of this project is a criticism of the current functioning of other design schools: it is not directed by a financial model and ensures a truly professionalizing curriculum for students. Moreover, the program developed by Dominique Sciamma crosses many disciplines. Filled with diversity, like his professional career, it responds to all the challenges that the world presents to young designers. It is composed of seven pillars: culture, representation, creation, human and social sciences, collaboration and problem solving, the functioning of a human organization and finally professionalization.

A world to save

"The Covid crisis has been an exceptional gas pedal of awareness, of the need for profound change. "

For Dominique Sciamma, the crises we are experiencing are not insurmountable: he advocates getting out of the sublimated model of consumer society which is a model of separation.

"We are in a world that is outside of us and that does not belong to us, in which we must inscribe ourselves. Because yes, we are there, we are numerous, we multiply, we enjoy it, but also we degrade it. How do we ensure that this enjoyment is perpetuated without degrading? "

"The cause of women, social injustices, the anger of young people, all at once, are systemic. That's where we see that all this is connected, that women are violated in the same way that nature is. "

The end of carelessness.

Every day with students, he notices how the current youth is violated in its imaginations, in contrast to the youth to which he belonged and whose imaginations knew no limits: only the abundance of consumption. He knew a form of carelessness, a kind of detachment, whereas the youth of today is more politicized: empowered, it denounces the heritage of "the old world" whose promised radiant days have turned bad.

Dominique Sciamma underlines that we live in a complex situation where the youth changed nature because of the imaginary which are proposed to him today, which support the cynicism, the escape or the pure anguish.

The role of artists

Artists have an immense role to play in our society as free spirits and creators, and although they are not there to produce a political discourse, they can contribute to it. According to Dominique Sciamma, although they have a political thought, their first role is to open doors, to provoke, to take the others out of their zone of confidence, to make them uncomfortable. They have a great role as destabilizers.